How The Bard and the Bible began

I get mixed reactions when I tell people about my book, The Bard and the Bible (A Shakespeare Devotional). 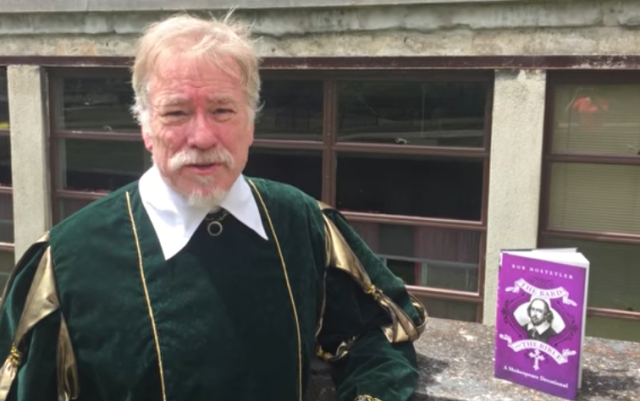 Some people seem puzzled by the pairing of holy writ with Shakespeare. Some think both the Bard and the Bible (especially the King James Version) are boring subjects and sources. And some get excited because they love both Will’s works and “The Word.”

Still others ask, “How in the world did you come up with that idea?” The answer is fairly simple. Long ago, in my twenties, I think, when I fell in love with the beauty and power of Shakespeare’s writings, I couldn’t help but notice how often he quoted to or alluded to the Bible. And, since both the King James Version of the Bible and the works of Shakespeare were created in the Elizabethan and Jacobean age, in England, in London, just across the river from each other, they often sounded similar in language and theme.

At some point, I created a flip calendar that paired quotes from Shakespeare with verses from the King James Version of the Bible. The parallels or contrasts between the verse and the quote often stopped me in my tracks, so to speak, prompting reflection, insight, even worship. I tried to sell the flip calendar as a gift product but never got a publisher to see its value. Then, one day as I flipped the page, the thought occurred to me: Why have I never developed this idea as a devotional book? The answer came quickly: Because I’m dense.

So I bounced the idea off of my agent, who said, “I can’t believe no one ever thought of that before.” I took that as a good sign, wrote a proposal, and soon had several publishers interested. The book itself took much of a year to write, but it was pure joy, some of the most fun I’ve ever had as a writer. And now it is a one-year devotional from Worthy Publishers, available from Amazon, Barnes and Noble, CBD.com, and of course from the best bookstores around the world.

I am a writer from southwestern Ohio, and a frequent speaker at churches, conferences, and retreats. My books include The Bard and the Bible (A Shakespeare Devotional).
View all posts by writerhoss →
This entry was posted in Bard, Bible, Books, Writing and tagged king james version, shakespeare. Bookmark the permalink.