This past Saturday evening my wife, the lovely Robin, accompanied me to a Shakespeare in the Park performance of The Merry Wives of Windsor at Keehner Park, in West Chester. 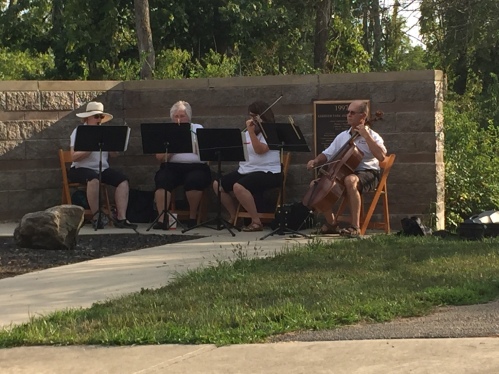 A musical prelude to the play was provided by a quartet from the West Chester Symphony Orchestra (above), with what sounded like period-appropriate selections (including “Greensleeves”). 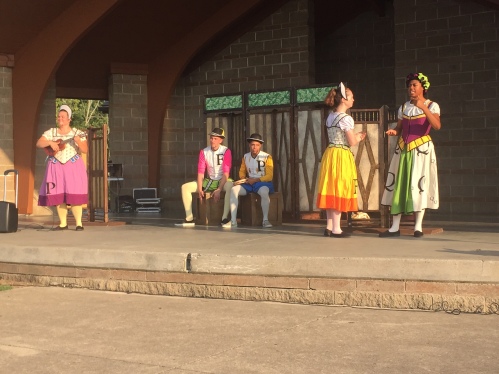 Merry Wives cast members then provided an entertaining prelude of their own (above), with three comical songs. 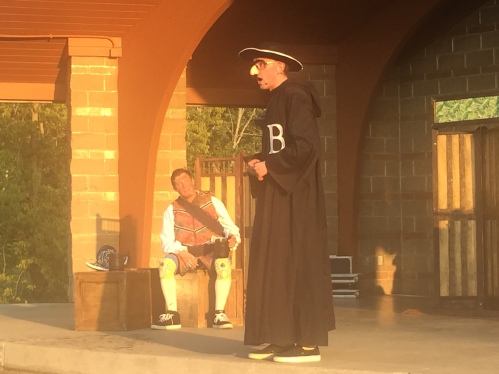 The play commenced, then, with five of the six actors playing multiple roles, of course. Five of the six were also making their Cincinnati Shakespeare Company touring debut in this production and the other Shakespeare in the Park production, Romeo and Juliet (I’ve heard of that one). The costuming was unique and delightful, with the principal roles of Ford, Mistress Ford, Page, Mistress Page, Shallow, Brooke (above), and Mistress Quickly identified by an initial (or initials).

The cast played for laughs, and Emily Sullivan and Bridget McCarthy, especially, shone as Mistress Ford and Mistress Page, respectively. The show involved fun audience participation, and the customary jig concluded the entertainment on a fine August evening.

I am a writer from southwestern Ohio, and a frequent speaker at churches, conferences, and retreats. My books include The Bard and the Bible (A Shakespeare Devotional).
View all posts by writerhoss →
This entry was posted in Performances, Plays and tagged Cincinnati Shakespeare Company, Reviews, shakespeare, The Merry Wives of Windsor. Bookmark the permalink.