For the second year in a row, I enjoyed part of the Kentucky Shakespeare Festival‘s annual Bard-a-Thon (see here for my post on last year’s event).

My friend, Bill Riley, and I journeyed to Louisville’s Central Park from our annual prayer retreat at the Abbey of Gethsemani. I was afraid that the heat (temperatures over 90 degrees) would make for a miserable evening but we went anyway. The heat did force a cancellation of the first (4:30 p.m.) planned performance of Richard II; the heavy costumes and afternoon heat would have been dangerous for the performers.

We enjoyed the 7:30 performance of Much Ado About Nothing, which was ably performed by all. There were a few tiny missteps in dialogue, but the performers all did a great, energetic job. Gregory Maupin as Benedick and Abigail Bailey Maupin (that’s right, husband and wife) dashed off their roles.

It was a particular delight for me to see Cincinnati Shakespeare’s Cyrstian Wiltshire (above) in the role of Claudio (I saw him last as Ferdinand in The Tempest, I think), opposite the adorable Alisha Espinosa as Hero. John Becraft’s portrayal of Don John struck me as too bombastic, but the rest of the cast turned in stellar performances. 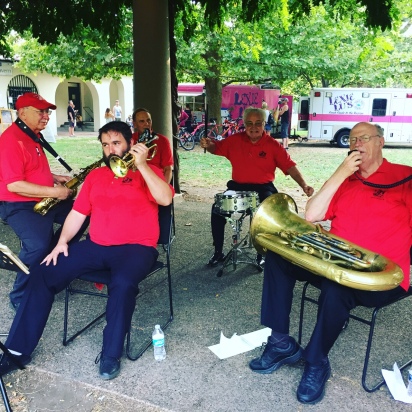 The performance was preceded by the ragtime stylings of the Rascals of Ragtyme band (above). What troopers, to find that much wind in ninety-degree heat.

We didn’t stay for the 10:30 performance of Julius Caesar, as it was already past my bedtime by the time we headed back to the monastery. Maybe next year I’ll be young enough to stay up that late.

Many, many thanks to Kentucky Shakespeare for a delightful performance. See you next year!

I am a writer from southwestern Ohio, and a frequent speaker at churches, conferences, and retreats. My books include The Bard and the Bible (A Shakespeare Devotional).
View all posts by writerhoss →
This entry was posted in Performances, Plays and tagged Claudio, Kentucky Shakespeare Festival, Much Ado About Nothing, Reviews, shakespeare. Bookmark the permalink.